We’ve always defined a Sample Slab as a slab, given away for free, at coin shows and other events. Free being the key word here, because Promotional Slabs are also given away free at the same type of events, and this is where the confusion starts.

A Sample Slab is created to show off something as important as a new design to the slab itself. It might be a new security feature, or something as small as a change to fonts on the label.

On the other hand, Promotional Slabs are a way to promote a coin show or a member’s only luncheon, or coin club, and even to promote a special date such as the 1997 NYC 106th anniversary of the ANA. I even know of some that were given away at a wedding.

Since they are all given away for free, then the actual difference in these slabs is the word “SAMPLE” on the label. I thought the best place to start would be with one of the first Sample Slabs created. 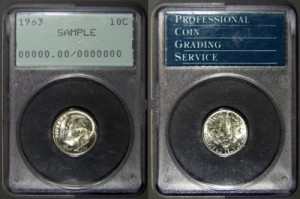 The above image is one of the first PCGS Sample Slab and produced sometime in the late 1980’s. Compared to today’s samples you can see how very basic it is, without a grade or any serial number and no hologram.

With a 1963 Roosevelt Dime inside, this samples can also be very hard to find and, if you do find one, the cost is going to be quite high. The actual production numbers of these Sample Slabs is unknown. This is also the only first generation sample with proof coin inside.

Here’s another Sample Slab from a different TPGS. This Sample is from NGC and houses a silver 1959 Roosevelt Dime. Again the main word on this slab is “SAMPLE“, but this time with a grade and serial number. 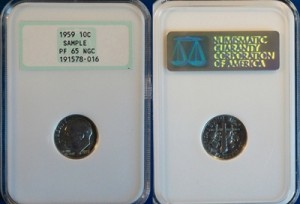 You can also see, that unlike the early PCGS version this slab, has a hologram. It’s also a “Green” label. I have read that the green border is “a hard to find sample” but the green and the brown border are one in the same. This also goes for regular production slabs as well. The difference in colors were caused by colour-fast problems in the dye, which caused some of the brown labels to fade to green when exposed to the elements for some time.

The image below is from the same company and is a perfect example to start with when it comes to a Promotional Slab. Concerning this NGC slab, the first thing you should notice is the “SAMPLE” isn’t on the slab. You can also see the slab label is promoting Heritage Auctions; it even gives the phone number. 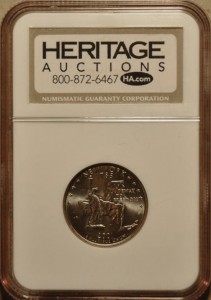 This was also handed out freely to promote this specific company with a 2001 New York State quarter inside. The State quarter was, and still is, a very popular coin to use in both Promotional and Sample Slabs. Notice that it doesn’t have a grade or serial number either.   

Here’s another Promotional Slab, this time from ANACS, celebrating 35 years of numismatics. Notice the word “SAMPLE” is nowhere on the slab, even though it’s promoting ANACS itself. Surprisingly they did not use the word “Sample” on this slab. 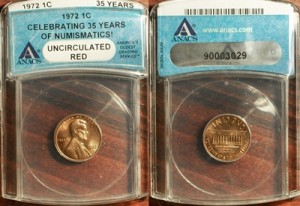 The company is not showing a new slab or label change; therefore to me, it is not a Sample and an example that causes so much confusion. It was given away free and is promoting the amount of years the company has been in business.

We have always accepted these slab types as Samples but they are not. It can be confusing, but after a few facts are pointed out it is easier to realize the differences. We have looked at the difference between sample slabs and promotional slabs and seen how different they really are.

Now, just to make things even more confusing, there is another type of slab. This type of holder was designed by NGC in 2003 and is the first time it was used as a Sample or Promotional holder because it is both! 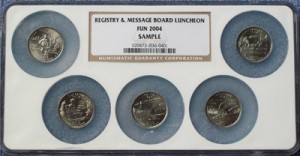 Where does this slab fit in? Well, it was only given out to members that attended the Fun 2004 Registry and Message Board Luncheon, but we also have the word “SAMPLE” on the front of the slab, not in tiny lettering on the back.

Furthermore, it is a new slab for NGC, so even without the word “SAMPLE” on the front, it would be still be considered a Sample Slab for no other reason than that it’s the first time it was ever used. Again, there’s no grade or a serial number either.

For me, if it has the word “SAMPLE” on the label, I call it a Sample Slab. It houses five 2004 State quarters and there were only 50 produced. I have seen a few different versions of these samples up for sale several months ago. From what I remember, they sold for a very high price and with only 50 produced, it is no wonder.

Here is another style of Sample-Promotional Slab, this one being a 2010 Collector’s Society Members Luncheon slab, with the word “SAMPLE” on the orange border label. 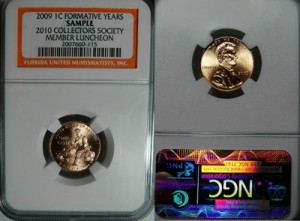 The best part about this, or any type of members-only luncheon slab is the low quanity produced. They are made specifically for a small group of members who attend the luncheon, so they’re rare and this makes them even more desirable to collectors.

In this respect, these Sample Slabs are like coins, the smaller the mintage number, the higher the premiums are going to be. I recently received this sample from a good friend of mine.

Next, is a very different type of slab and it’s not a Promotional slab, but is it a Sample? It does say “Authentic”, so where would this slab fit in? 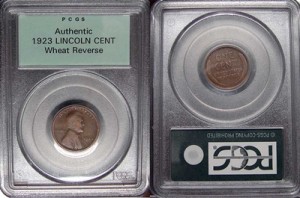 It is an unusual type of slab, and what I enjoy the most, is the fact that they house a circulated coin. The coins range from 1917 to 1929, as far as I have seen. I have never seen a 1921 or a 1922, and do not think they were ever part of this set. They were produced by PCGS to go in to a Random House Coin collecting starter kit.

So, I would have to assume these slabs, were an example of what a slabbed coin would look like. Therefore, it would be considered a Sample. Estimated mintage of this slab was an amazing 50,000 to 100,000.

If compared to other Sample Slab production numbers produced, of a thousand or less, and they make up the largest amount of Samples ever produced.

It should be an easy slab to find, although I have not seen one for sale recently. It has me wondering just how many were lost, forgotten or thrown away after the starter kits lost their fascination?

With that amount of samples produced you should be seeing them all over the auction sites, but such is not the case. Lastly, but important, is the fact that it has no hologram on the back.

Here is one more PCGS Slab that I find fascinating, and it contains an American Silver Eagle. It says “Coin Facts Luncheon” and gives the date of January 3, 2007. Notice the label is different for this slab and so is the font under the logo. 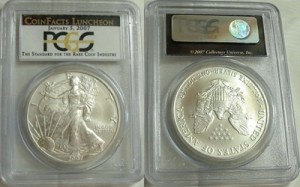 This one says “The Standard for the Rare Coin Industry”, but it does not say “Sample” The words “Coin Facts Luncheon” is the banner for this slab. There’s no grade or serial number, and because of the different label, and the fact that the type font is completely different from other PCGS slabs, and it is promoting PCGS itself, it could be called a Sample Slab.

If, however, this slab was promoting some other company and PCGS produced it in another name I would call it a Promotional Slab. This slab would have been produced in very limited quantities, to give to the members of the luncheon only. This one is definitely on my want list.

I have been thinking about writing this article for a while now, I have been asked several times “How can it be a Sample if does not say SAMPLE? As there are some Samples that don’t, It can become very confusing at times, so I hope this has cleared up some of that confusion.

I attempted to use some good examples of these different slabs so they can be a reference for the new collector.

Regardless what you call them, they are all great fun to collect and how you classify them is really up to you. I buy all types, no matter what they say. For me, the only order I put my collection in is TPGS Samples then Promotional Slabs.

So, in the future, if you see a luncheon slab for sale, you will understand why it is selling for a premium and, therefore, justify the price.

All these slabs have their place in the history of numismatics. What you are doing, by collecting Samples, is tracking the evolution of the slabbed coin.

“So Remember to buy the coin not the holder.
But when it comes to sample slabs, buy the holder not the coin!”

2 thoughts on “Sample Slabs Aren’t Promotional Slabs, But Some Are Both”