Hello, everyone. First let me say, it is good to be back writing about my favourite subject. I took a bit of a hiatus, as the research fact finding and checking got to be very intense for me. I just needed a short break, but now I am back and raring to go and wrote this article on sample slab values and what’s happening.

I am always watching the sample slab, mainly on eBay, and prices are rising, as I have said in other articles. Sample slab sites seem to get grouped together on different pages, and I have made shortcuts of each page to my desktop as there are several of these sites.

This gives me the chance to follow samples; I can also observe what the samples are selling for. Even the very new samples, and by “new,” I mean produced in the past year or two, are selling for much higher rates than one would expect for a new sample. 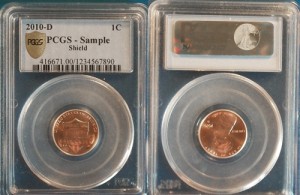 Now I wanted to ask a very important question, so I sought the advice of someone I like to call a “Master collector.” He has been collecting samples for many years, acquiring vast amounts of knowledge on the subject. This is the question I asked him: “Is this the first time sample slabs have encountered such a rise in popularity and, if so, did the premiums on sample slabs go up as well?” Here is the response he gave to my question referring to sample slabs.

“It is seeing resurgence in popularity, with prices up-ticking as a result.”

Yes, they have hit an upswing before and higher prices as well, but the hobby slowed down waiting for the next resurgence. Well, that time is upon us again as new collectors begin their search for high-end samples before they disappear or become out of reach for the average collector.

You will often find two or more of the same sample listed, one at the low end the other at the high end. Yet they are the sample slab! Let me give you an example: a few months ago I bought a 1964 NGC Kennedy half dollar sample slab for about $15.00, now I see the same sample slab selling from $29.00 to $60.00, what is up with that?!

Prices are all over the place when it comes to sample slabs with no let up in sight. With raw or slabbed coins, you expect to pay a certain amount for either of the two.

A raw coin sells on the condition, date and so on. A slabbed coin sells for the same reasons only the buyer already knows the grade, but with so many already being sold and populations recorded, the buyer has good idea what the raw or slabbed coin will cost.

With samples the pricing is much different. How did I get my 1964 Kennedy at such a low price, when the same coin is selling for $29,00 to $49.00 and more? This is what makes buying sample slabs so much fun, there are deals out there, and you just have to look. When comparing two exact sample slabs of the same generation and same coin.

It is not like one has a better strike or is a key date; they are, for the most part, the same. I have come to one conclusion and that is: the hobby of collecting sample slabs is again growing. I think this time it will remain a popular hobby, but, of course, that is my own opinion formed from all the research I have done.

The prices have not yet stabilized, so until that ever happens, you are going to find these kinds of price differences. I have been watching some samples on eBay; I am going to show a list of the same samples and the differences in pricing.

All these samples are from approximately the same time period. Also, remember that sample slabs from any generation may have more than one date – this is true of a lot sample slabs.

The 1963 did have a proof dime in the sample slab, but are still part of the first generation PCGS Sample Slabs

These next Sample Slabs were produced between 1986 and 1989. Known as “The Rattler.” Other than the year and coin, each sample listed looks pretty much the same. Except for the PR-1961 Roosevelt Dime, as it had a proof coin inside and is one of the most difficult samples of this type to find

Remember, these are just the samples I was following, I have seem sample Morgan’s sell for even more than the above prices. What you have seen above is indicative of all sample slabs. Now, here is something I found very interesting and it has to do with a promotional slab. I paid around $10.00 for this slab and have seen it around a lot lately. 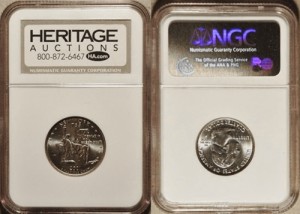 Now just take a look at what this slab has been selling for, the only difference in them are the different State quarters inside the sample. Other than that, they are all the same slabs:

1982 Washington Commemorative Sample
Now these NGC sample slabs are both from around the same time period. One is a proof and one is a mint, but for the most part the two samples are alike. Remember, when buying sample slabs, grade is not as important as the rarity of the sample itself. Both these samples were dealer slabs and were not handed out to the public.

This is not an easy sample to find, notice the amount of bids on each. If I were bidding, I would not be concerned about the grade proof or mint status. As a collector, I would find either sample to be a prize.

I have been following the sample slabs shown above since the idea first came to me, trying to show that sample slabs have not yet found themselves in a place where the prices are evening out. Now, this is my own opinion, but I somehow doubt they ever will.

With samples starting from the first generations that are now becoming so rare to the new samples just coming out and all the sample slabs in between, it comes down to this: “There is just no way to grade a sample slab.” That and the fact that sellers are realizing prices like never before.

The sellers are also part of the equation, as they are starting to open the bidding with a higher price because they also see the hobby is growing very fast and the number of the bidders is increasing.

The good news is if you look at the samples and the prices they have been selling for, you can see that there are bargains to be found. Not that long ago, samples would have attracted far less bidders; therefore, the prices would be have been much lower.

Look at sample slabs that are still up for sale, you will notice that even with three or four days left in the bidding the amount of bidders is often quite high. This is something that I am seeing more and more often. I see the proof every day with the high prices and the large amount of bids. We have a growing numismatic hobby with collectors all hunting down the best bargains they can find.

There are those who have collected samples for years, but they have always been in the minority. I have heard it said, “I just don’t see the fascination in collecting sample slabs” and why should they! That is the great thing about coin collecting everyone can collect whatever coin or slab they choose, but nonetheless, it is a hobby and as those who have

collected samples from the beginning will tell you: it is fun and exciting with the thrill of the hunt always there to challenge even the most seasoned of collectors. With so many samples to choose from sample slabs are proving to be a valid and exciting part of numismatics.

1 thought on “Sample Slab Values: What To Expect”